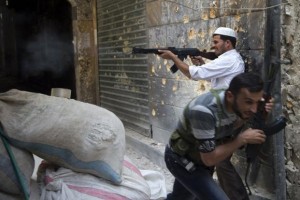 Syrian rebel forces have taken control of a strategic town in northern Syria, cutting off government forces’ only supply route out of the city of Aleppo, the Syrian Observatory for Human Rights has said.

The Britain-based monitoring group said the fall of the town of Khanasir, between Aleppo and Hama, would leave forces of President Bashar al-Assad besieged in Aleppo province.

The rebel advance came amid reports that a prominent Alawite religious leader has been killed in the province of Latakia.

The Observatory said on Monday that it had obtained a photograph showing the execution of Badr Ghazal by hardline rebels.

Some Syrians were sceptical about the purported killing of Ghazal, saying there was still no definitive proof, but the Observatory said rebels from the Nusra Front shot Ghazal after he was kidnapped in the northern suburbs of Latakia earlier this month.

Meanwhile, residents in the central province of Homs said rebels also tried on Monday to retake the strategic town of Talkalakh, 4km from Lebanon’s northern border.

Its capture would allow rebels in the Homs countryside to replenish their supplies.

For weeks, Assad’s forces had been on the offensive in Homs, a province they consider vital to securing their hold from Damascus to the president’s coastal stronghold.

The coast is home to a large number of Assad’s Alawite minority sect, an offshoot of Shia Islam, who are seen to be supportive of the president.

But the advance near Talkalakh and the purported assassination of an Alawite cleric suggest the rebels are tentatively trying to push back in central Syria.

Sectarian violence has increasingly overtaken a conflict that began as peaceful protests against four decades of Assad family rule but has now become an all-out civil war.

The sectarian dimension of the conflict has drawn in foreign fighters from neighbouring countries. Lebanese Shia group Hezbollah has sent fighters to join Assad’s forces, angering Sunni Muslims in Lebanon and the region.