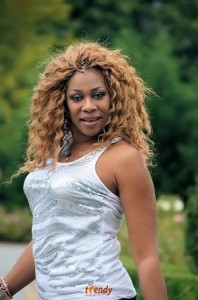 Contrary to wide-spread belief that Regina Askia penned down a bitter letter to Femi-Fani -Kayode regarding the controversial naming of Igbo ladies he had been intimate with, she has come-out to deny this on her facebook wall..but she still passes across some strong points

(Read her disclaimer below)

“May I seize this time to thank all my fans especially my Yoruba friends for their support through this very annoying ordeal. It’s sad that some hungry blogger can up and publish anything and append anyone’s name to it thinking they can remain faceless behind social media but thankfully through the same means and your vigorous support we were able to turn that around. I thank my reps for wise counsel and for swiftly identifying the faceless cowards even though these individuals proved to be of little consequence hence no wasting of resources in legal pursuit – at this time.

In the same spirit of love and cooperation, I would request that my generation of Nigerians wholeheartedly reject the notion of tribalism, xenophobia, hedonism and nepotism being displayed by our men and women in power. For how can we explain beggars and the destitute being deported from one part of their country to another as opposed to the government investing in better social services, how can we explain an individual having his home sealed for purportedly speaking up against an injustice, how can condemn a whole tribe of people because of injustices of years before most of us were born? Did you guys see the violence when a member of the house hit another on the head with a mace, did you hear the utterances of BokoHaram having enough fire power to on the US (Im sorry but I had to laugh at that one). We fought a bitter war in the late 60’s the scars of which we all bear to date and these careless statements and attitudes will do nothing but eventually lead to another. It is time to call our leaders to order. We saw the genocide in Rwanda and the degeneration of the society of Congo. It would be real easy for the “Big Brother countries” of this world to come and help us get our house in order since we cannot do it by ourselves (soft invasion). We need to stop and refocus. Finally I always say you can tell who a person is just by listening to their utterances for out of the fullness of the heart the mouth speaketh. I don’t think its right that a mother would call another person’s child, a bastard, nor should a woman call another a slut. Real gentlemen do not kiss and tell, a well-bred and cultured person has tact enough to tell you to go to hell and have you looking forward to that trip. Let us each be at this time the change we want to see. Till then I remain – The ultimate Sisi Eko (because Lagos is where I was born an partly raised) of a proud Akwa Ibom lineage, totally Nigerian to boot, living as a citizen of the world in the United States of America. Deal with it!!

Long live the Federal Republic of Nigeria!! One Love.”

Read the letter which was claimed she wrote below

I’ve Just Been Told That Having séx With An Igbo Woman Is A Great Accomplishment!!! After reading another hard-drug-influenced-essay by the Yoruba idiot parading himself as Femi Fani-Kayode,Ex-Minister of the Nigerian Federation, I felt there was no need to blame him for giving us another reason why his family members should as a matter of urgency, BUNDLE HIM BACK TO A REHAB! No!

I don’t blame Femi Fani-Kayode for having a fun-filled day telling us how he ‘breezed’ through Bianca Onoh before our very revered Eze-Igbo married her… I blame Bianca Onoh , Chioma Anasoh & Adaobi Uchegbu for being naive or to have rather stooped so low to have intimate relationship with a Yoruba rascal/urchin/idiot whom i’m very sure was on heavy use of cocaine (and still is) at the time!

Were Bianca, Chioma & Adaobi blind to Femi’s madness/drug-addiction or maybe he flashed his Ministerial/Ex-Ministerial portfolio to entice them? This is the first time a former public figure (I blame Former President Obasanjo for giving him that privilege) has preferred to reel out the names of women he had séx with, in a bid to show-off how he has been able to conquer tribalism in Nigeria or maybe trying to tell others he has been able to have séx with one of the prettiest ex beauty queens another tribe may boast of, like Bianca Ojukwu (Nee Onoh) of the Igbo tribe.

Some persons have advised that Femi Fani-Kayode should be ignored due to his MENTAL INSTABILITY but i say NO to it! I will not ignore him because when a mad-man chases one into his house & still want to exhibit that madness there, the owner of the house will definitely react except he doesn’t value his house!

This has taken a tribal angle & its such a shame that many Yorubas have been applauding Fani-Kayode’s spiteful comments against the Igbo. I may not want to generalize the behavioural disorders of even the average Yoruba, but i want to use this ample opportunity to remind our single Igbo sisters that if “He” is not Igbo, He can’t be like an Igbo-man who won’t be so ridiculous to think that giving us some of the names of our ladies he had séx with makes him a superman, as Femi Kayode must be ‘thinking’ in his fool’s paradise.

Right now in Nigeria, the likes of a Yoruba bastard like Femi Fani-Kayode have proved that Igbo women should think “wisely” in making choices as regards whom they allow ‘ACCESS’ to their much fancied bodies. An Igboman would NEVER do what Femi Fani-Kayode did with the names of Bianca Ojukwu (Nee Onoh), PDP’s Adaobi Uchegbu & the relatively unknown Chioma Anasoh or even women from other tribes. He typically exhibited behavioural disorder of the Yorubas, which is to them, a normal way of life. What a shame!

Bianca Ojukwu & the other two ladies should as a matter of urgency, reply Femi Fani-Kayode’s show of lunacy, stupidity, foolishness, infantile reasoning & utter disrespect for them!

Femi Fani-Kayode consciously & gladly made a spiteful remark of Igbo women & our women should take the fight to him in a very deserving impudent manner! I am waiting for the responses by Bianca, Adaobi & Chioma.

By the way, I never knew men from other tribes take having séx with an Igbo lady as a great feat… Bianca & others should hold their heads high up.

Share
Facebook
Twitter
WhatsApp
Previous articleMy husband sleeps with my House Help – A woman’s cry for Help
Next articleFirst Aid: How To Help A Victim Of Stroke!
- Advertisement -