Despite their lethargic reputations, snails can travel at a relatively speedy one metre per hour, say researchers. 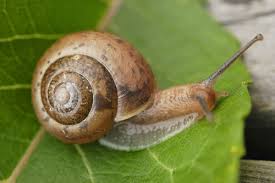 By attaching multicoloured LED lights, the scientists were able to track their movements over a 24-hour period.

The gastropods were fast enough to explore the length of an average UK garden in a single night.

But scientists are worried that the fast-moving snails are spreading a parasite that is deadly for dogs.

Over the past few years the wet summers enjoyed across the UK have proved the ideal breeding grounds for snails.

According to the Royal Horticultural Society, their numbers increased by 50% last year. As well as being a pest for gardeners, snails can also spread a parasite called Angiostrongylus vasorum.

This lungworm is a particular threat to dogs, which can become infected by accidentally eating slugs or snails which they come across in the garden or on dog toys.