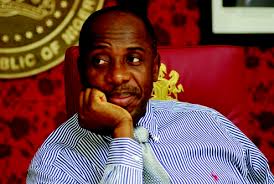 The Rivers State government condemned the arrest of two People’s Democratic Party (PDP) local government officials in the state saying the manner of their arrest was suspicious as it does not conform to the laws of the land.

Speaking yesterday with newsmen in Abuja, the state commissioner for information, Ibim Semenetari, said as far as the Rivers State Government is concerned, the two officials were kidnapped as no reason was given for their arrest by the police in the state.

She said, “The two party officials from Omuma local government area were just kidnapped and taken to Abuja. They were not told their charges; we understand that it is because they had suspended a member of state house of assembly representing the constituency, Kelechi Nwogo who had allegedly called for Governor Amaechi to be shot during the fracas in the state Assembly.”

The commissioner noted that the party officials were dissatisfied with the member as he was not speaking or talking on behalf of the people he was elected to represent, so the Omuma people put in motion a process to recall him from the Assembly.

The member, according to Semenetari, ordinarily, should have prepared to test his popularity among his people but state institutions were employed to divert attention from what the people wanted to do.

“Then we did see the police come and take them straight to Kuje prison and we learnt they want to be tried for sedition. On what basis are they talking about sedition? In any case, even if it is sedition, it is a state offence so why are they taking them to Abuja?” she queried.

She lamented that the police in Rivers State may have been compromised to the extent it is involving itself in political issues while abandoning its core duty of providing security.

“Foreign nationals have been kidnapped, this is something we have not heard about for so many years and the economy of the country is being threatened, yet they are not bothered,” she said.