Road accidents in Nigeria have claimed a total of 322,427 lives between 1960 and 2012, according to the Federal Road Safety Corps (FRSC) in its 2012 annual report released recently. 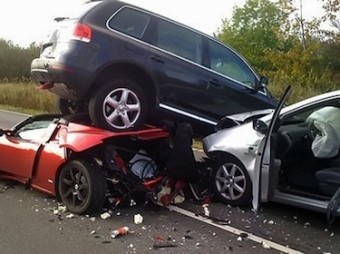 Analysts however say the number of deaths may be more than the given figure since most people involved in road accidents die weeks after and such deaths may not have been recorded officially.

The FRSC lists the most causes of road crashes to include human, mechanical and environmental factors.

Bad roads, route violation and obstruction accounted for 2 percent each, while burst tyres 9 percent. Others are brake failure 5 percent, mechanically faults and wrongful overtaking tied on 3 percent in the top 10 probable causative factors of road traffic crashes in 2012.

2012 alone had a total of 4,260 reported deaths on Nigerian roads, representing an average of 12 persons dying daily. 20,752 injuries were recorded in the year, translating to an average of 57 injuries daily.

In the reviewed period, Nigeria had five deaths per 10,000 vehicles and four deaths per 100,000 persons, according to the report from FRSC. Analysts say these figures are still very high, hence unacceptable. Both the elite and the powerful as well as the common man are not spared in these preventable deaths.

Many of these preventable accidents, unnecessary loss of lives and avoidable waste of resources, in terms of damaged vehicles, expenses on hospitalisation bills, repairs of damaged roads and infrastructure, as well as loss of man-hours, actually occurred during the last quarter of the year.