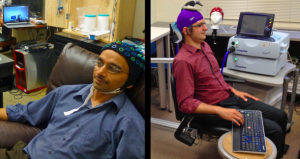 University of Washington scientists Rajesh Rao (on the left) and Andrea Stocco (on the right) claim that they have been able to demonstrate human brain-to-brain communication, a feat that has only been successfully demonstrated between rats and from human to rats.

A University of Washington press release described the experiment as follows:

The team had a Skype connection set up so the two labs could coordinate, though neither Rao nor Stocco could see the Skype screens. Rao looked at a computer screen and played a simple video game with his mind. When he was supposed to fire a cannon at a target, he imagined moving his right hand (being careful not to actually move his hand), causing a cursor to hit the “fire” button. Almost instantaneously, Stocco, who wore noise-canceling earbuds and wasn’t looking at a computer screen, involuntarily moved his right index finger to push the space bar on the keyboard in front of him, as if firing the cannon. Stocco compared the feeling of his hand moving involuntarily to that of a nervous tic.

Rao and Stocco next plan to conduct an experiment that would transmit more complex information from one brain to the other. If that works, they then will conduct the experiment on a larger pool of subjects.

Their research was funded in part by the National Science Foundation’s Engineering Research Center for Sensorimotor Neural Engineering at the University of Washington, the U.S. Army Research Office and the National Institutes of Health.

It’s about time our African governments focused resources on education and research.

By the way, when is the Academic Staff Union of Universities (ASUU) strike in Nigeria going to end?