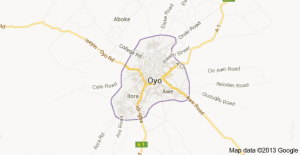 A clash between Mr. Akeem Adeyemi, son of the Alaafin of Oyo, Oba Lamidi Adeyemi and a lawmaker representing Oyo Federal Constituency in the House of Representatives, Mr. Khamil Akinlabi, yesterday, ended horribly, as some people were injured in Oyo town when supporters believed to be sympathetic to the monarch’s son clashed with the lawmaker’s supporters.

Dangerous weapons, including cutlasses, bottles and other items were said to have been freely used by the feuding parties during the clash.

The crisis, according to a source, was triggered when a group of people, last Friday, marched to the palace of Oba Adeyemi allegedly pleading with the monarch for the recall of Akinlabi whom they accused of not making any remarkable improvement in the lives of the people in his constituency since he assumed the seat in 2011.

They clamoured for Prince Adeyemi to assume the seat in the National Assembly in his stead.

A counter protest was however staged, yesterday, in Oyo with loyalists of Akinlabi from Oyo-East, Oyo-West, Afijio and Atiba local governments, faulting the earlier allegations against the legislator, displaying placards with inscriptions such as “Stop politics of bitterness”, “Kamil, man of the people”, ‘Kamil, hero of our time’, walking through major streets in Isale Oyo.

In his reaction, Mr. Waheed Ajagbe, Leader of the Akinlabi group said it was not fair to say the lawmaker had not done anything after digging about 175 boreholes across his constituency.

“He has distributed 16 vehicles to party leaders and Oyo Mesi (kingmakers). Akinlabi has also facilitated the construction of Erelu water project.

“In the area of education, he has facilitated the rehabilitation of Olivet Baptist High School, Isale-Oyo Community Grammar School, distributed textbooks and notebooks for pupils at Primary School level,” Ajagbe claimed.

He alleged that “of the 10 political appointments given to Oyo, six are being occupied by the sons and wives of the monarch. Are we going to fold our arms and watch people who want to help us being frustrated selfish reason?”

The protest started peaceful, but things went awry when some people from the other group allegedly stormed the venue and chased them away.

The quick intervention of armed mobile police men from Durbar division who reportedly arrived the scene with Armoured Personnel Carrier quelled the riot.