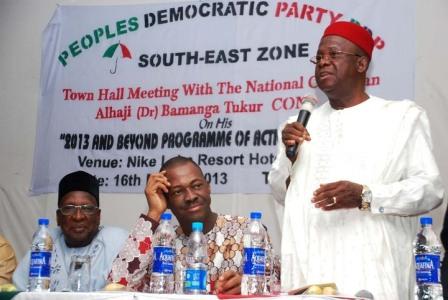 The South East Zone of the Peoples Democratic Party (PDP) on Wednesday passed a vote of confidence on members of the national executive committee of the party from the zone.

The party also agreed to retain the status quo in its zoning of the offices assigned to it to the five states in the zone.

Addressing newsmen after the zonal executive committee meeting of the party in Enugu, Mr Ali Odefa, the Publicity Secretary of the party in the zone, said that all members occupying various national offices would be supported to continue at the national convention of the party.

Odefa said the party also appreciated the gubernatorial primary in Anambra which threw up Mr Tony Nwoye as its flag-bearer.

Those who attended the meeting include Gov. Martin Elechi of Ebonyi, Gov. Theodore Orji of Abia, Deputy Senate President Ike Ekweremadu and Deputy Speaker of the House of Representatives, Rep. Emeka Ihedioha, among others. (NAN)