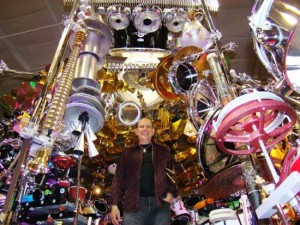 56-year-old Mark Temperato has spent the last 36 years assembling the world’s largest drum kit. The amazing instrument is made up of 813 individual pieces, including drums, cymbals and bells, and its creator needs an hour to hit every one of them.

Mark Temperato has always had a thing for drums. He has been building his custom drum set for the past 36 years, and he’s not planning on stopping anytime soon. A reverend at the Breath of Worship Church, in Lakeville, New York, Mark, who also goes by the name “RevM” has been using the popular musical instrument to “praise God” and get His word out “in a very different way”. Adding new pieces to his set every year, the amateur musician always thought he had the biggest drum kit in the world, but it wasn’t until his two sons, who are also drummers, prompted him to contact Guinness Records that he considered making the title official.

Last year, RevM finally got his name mentioned in the Guinness Book of Records after managing to hit every one of the 340 drums and cymbals from a sitting or standing position without taking a step to either side. But the newly-obtained titled only fueled his obsession with drums even more, so he spent the last few months adding hundreds of new components to his set which currently numbers 813 different pieces.

Hitting every single one of the 813 drums, cymbals and bells seems like an impossible task, but while RevM admits it takes him around an hour to do it, he says his 28-inch-high chair allows him to reach every piece. The monster set weighs around 5,000 lbs and requires 17 hours of maintenance a week. It takes four people working diligently 14 hours to assemble the drum set, and another 10 hours to break it down and packet away. To take his pride and joy with him on the rode, Temperato uses a customized 18-wheeler trailer truck fitted with compartments for every drum and cymbal.

RevM stopped at 813 pieces to have it match his birthday (Aug. 13), but he’s already thinking of ways of adding more stuff to the drum set and plans to reach the 1,000 pieces mark very soon. 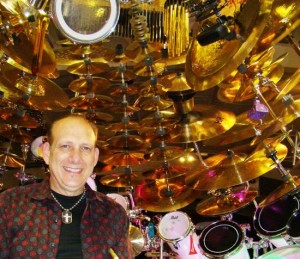