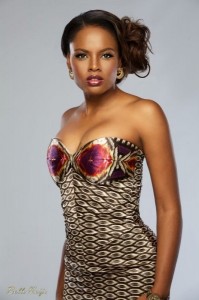 Famous African soap opera Tinsel is proud to announce that one of its characters, Matilda Obaseki, is set to wed.

The actress, who is already blessed with a baby and fiancé, is set to complete the circle as she carefully plans out a September wedding.

The 27 year-old actress and her fiancé, Arnold, have been planning the upcoming wedding for weeks now.

The cute couple got engaged in March 2012 and joyfully brought to the world their first child six months later.

Sources say Maltida has been keeping things on a low key as she discreetly distributed wedding invitations last week.

‘Yes it’s true, I’m having my wedding this September, that’s all I can say for now‘, Matilda told a media outfit over the phone.