Home News Feed SHAME!! See What This NBA Basketballer Did To This Homeless Beggar On...
Facebook
Twitter
WhatsApp 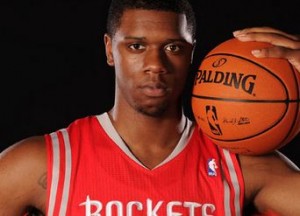 Houston Rockets forward Terrence Jones had a rather nondescript rookie season, but after a solid showing in the NBA Summer Leagues in Orlando earlier in July, he and his young Rockets team were probably hoping to make waves heading into a crucial 2013-14 campaign. Allegedly, Jones is off to a very poor start in terms of breaking into the public’s consciousness.

KATU is reporting that Jones was arrested after allegedly stomping on the leg of a homeless man after leaving a bar in Portland on Wednesday morning. Jones, who is a Portland native, was reported to have been observed by a police sergeant in the wee hours as shouting down the homeless man before kicking the victim’s leg. From the station’s website:

While watching the group walk away from the bar, the sergeant observed a man, later identified as Jones, walk by a doorway where two homeless men were sleeping, according to police spokesman Sgt. Pete Simpson.

The sergeant said Jones yelled, “Wake up,” then raised his leg and stomped down on one of the man’s legs. The men were sleeping in the doorway of 114 Northwest 3rd Avenue.

The time and setting all point to the 21-year old Jones allegedly doing something very stupid after imbibing too much, but if the sergeant’s report is accurate this sort of act flies way past the bounds of committing a bonehead act after drinking quite a bit, and into the bounds of needless assault on a helpless victim.

Jones, who spent most of his rookie year working in the D-League before leading the Rockets’ Summer League team with a 15.8 points per game average, is due in court to face harassment charges next Tuesday afternoon.