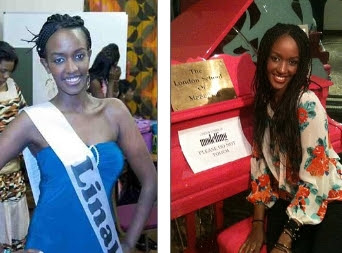 She was stabbed to death with her three-year old-daughter ‘crying next to her in a pool of blood’, friends said.

The body of Linah Keza said to have taken part in Miss Africa 2010, was found at a flat in King Edward Road, Leyton, early Wednesday morning.

A man has been arrested on suspicion of murder.

London Ambulance Service paramedics accompanied police to the address just before 4.30am, but Linah, a Rwandan national living in London, was pronounced dead at the scene.

It is understood that her daughter was at the address at the time of the attack, according to a family friend.

Herbert Muhire said: ‘[Her] daughter is being taken care of and treated for trauma and other consequences as she was found crying next to the mother who was in a pool of blood.

‘Family and friends have been briefed how she was killed and died a gruesome death.

‘Everything is being done that Linah’s body be brought and buried in respect at home in Kigali [Rwanda].’

Tributes to Linah from friends and relatives were left on a Facebook page set up soon after her death.

Azun Jezan wrote: ‘So sad, may her Soul rest in peace and her daughter and family be strong on these difficult sad time.’

According to police, a 38-year-old man was arrested after handing himself in at a north London police station yesterday.