It’s a photo that never fails to shock new visitors to an Australian pub. A man swallowed by a shark has managed to force his arm through the creature’s gills and is desperately stabbing it. 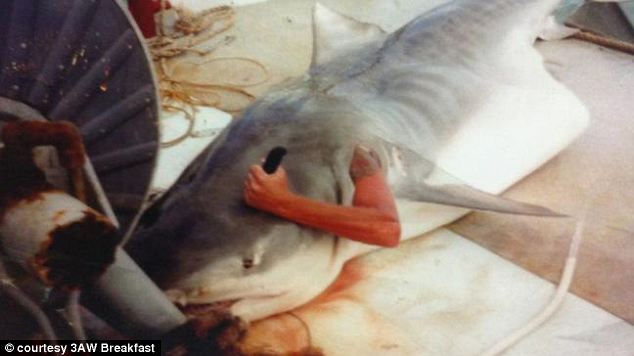 Desperate fight for survival? A picture appears to show a man swallowed whole by a shark frantically trying to release himself by forcing his arm through the creature’s gills and stabbing it in the head.

Presumably still alive inside the shark’s stomach, he is able to plunge the knife into the its head in a desperate fight for survival.

[Scroll down for video]

In fact the photo has proved to be quite stomach-churning for all who see it for the first time when they walk into the Metung Hotel, in the Gippsland region of Victoria. But all is not as it seems.

The unnamed fisherman did catch the shark and he did end up in its stomach. But first he made sure the shark was very dead before he gutted it and then crawled inside its body to prepare for a prank photo that would be taken by one of his friends.

The dramatic part came when he then pushed his tattooed arm out through the shark’s gills and pretended to be fighting for his life by stabbing the killer fish in the head.

Locals, said radio host John Burns of Melbourne’s 3AW, who was sent a copy of the photo, refer to the fisherman as the Shark Slayer.

“This fellow has decided as a jape to climb inside the shark with a knife, put his hand through the gills of the shark and pretended to stab it between the eyes,”Mr Burns told his listeners today.

He then went on to describe the reaction of one pair of visitors.

“An American couple have turned up at the Metung Hotel to see this photo (on the wall) and their immediate response from the wife was “Did he survive?” said Mr Burns.

The fisherman happened to be standing behind the couple at the time. Although his response is not known, the Americans might have had the shock of their lives if he’d said: “Yes, I did!”