Home National News Odd News Snake-bite Victim Socked After She Was Given A Bill Of $55,000
Facebook
Twitter
WhatsApp 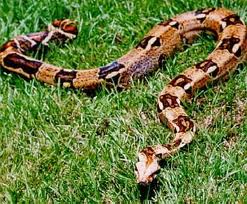 A Maryland woman treated for a snake bite received another shocker: a $55,000 medical bill.

Jules Weiss had stopped to take a photo at an overlook along the George Washington Parkway. On the way back to her car, she felt something bite her.

“It felt just like a bee sting,” Weiss told local station NBC4. “There were two fang marks with liquid coming out.”

The former emergency medical technician had suffered a copperhead snake bite. Within an hour, she said, her foot turned “grayish” and started to swell.

She went to Suburban Hospital in Bethesda, Md., where she received three IV bags of antivenom over 18 hours. Then, the scary part: a whopping $55,000 bill for treatment.

“It’s not a number I can really wrap my head around,” Weiss said. Health insurance would bring the cost down to a few hundred dollars, according to NBC4. But the woman’s insurance had just lapsed. Antivenom involves milking individual snakes and is a costly treatment.

The Bethesda Hospital told NBC4 it can cost as much as $40,000 to get the antivenom.

That’s not the only pricey treatment for an animal attack: Last year, a woman in Arizona stung by a scorpionreceived a bill of $83,000 for the antivenom treatment — a staggering cost of $40,000 a dose. Even after insurance, Marcie Edmonds still owed the hospital $25,000.