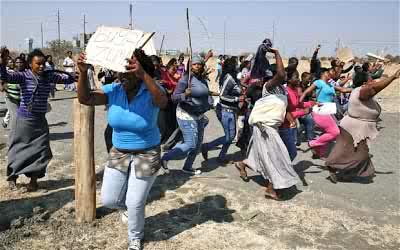 South African women married to Nigerians, yesterday, threatened to stage mass protest in Johannesburg to stop discrimination against them, their husbands and children.

Mrs Lindelwa Uche, the chairperson of the United Nigerian Wives in South Africa, UNWISA, made this known in an interview with the News Agency of Nigeria during the launch of the association, Sunday, in Johannesburg.

Uche said that South African society did not take their marriage to Nigerians as serious relationships.

She said: “Our society does not take our marriages serious, they see our marriages as relations of convenience and perceive us as evil to the society.

“All of us are South Africans married to Nigerians living in South Africa, we decided to come together to fight against stigmatisation, discrimination, and humiliation, against our families by government departments and agency and the officials of the government, the community and our-in-laws.”

The chairperson said an earlier protest march by the members of the association had not generated any response from the Home affairs office.

“We protested against discrimination from home affairs officials in March this year, and since after that protest we have not received any response from the government. We felt before we embark on any further action we should come together and form an association registered by law.

“After the official launch of our association, our next action will be more than just a protest march to the city of Johannesburg home affairs office. It is going to be a protest where we will strip on the street of Johannesburg, so that people and government will know that there is an existing body and that we are not happy with the way our non South Africans husband and children are being treated.

“We also plan to carry our protest to Nigeria, we know that some South Africans also have businesses in Nigeria, if it is necessary we will take actions that will stop South Africa businesses operating in Nigeria. Indeed we are ready to go that far.

“We have been quiet for so long but we cannot can’t take it anymore, for the sake of the future of our children, we have to put an end to this discrimination.”

She said there was need for them to collectively tackle the issue of some Nigerians residing in South Africa being unfairly separated from their families due to pending residence permit that eventually lead to deportations.

“If we don’t stand up for our children when they are being called derogatory names like “Small lee kwere-kwere” or turning their natives names upside down deliberately by our community in the name of making them feel like aliens, outcast, and unwelcome, or even when their Nigerian aunties and uncles call them bustards, then their future is in jeopardy.

“If we don’t stand up when our countrymen and women, officials and in-law address us as paper wives, gold diggers, stupid and opportunist, who will do that for us, ” Uche queried.

She said the notion that all Nigerians are criminals must be corrected.

“We are in a country of law and order, if anyone is found guilty let the law take its course, we are not saying Nigerians are good or bad, even in the South Africa society, there are criminals and indeed there is no country in the world that does not have criminals,’’ Uche said.

Ikechkwu Anyene, President of the Nigeria Union in South Africa (NUSA), said the association is a good initiative by the women who are suffering discrimination and humiliation because they are married to Nigerians.

“We at the NUSA have been working with them even before the association was registered as a body, we were with them when they carried a protest match to the home affairs office in Johannesburg,

“we will continue to support them to achieve their goal which is to put an end to discrimination by the government officials and their brothers and sisters towards them for being married to Nigerian.

“The initiative is also to unite Nigeria and South Africa and indeed the whole of  Africa, to see each other as brothers and sisters and to ensure that we stand by one another,” Anyene said.

He, however, advised the body to carry along all South Africans married to Nigerians irrespective of their tribe and geo-political zone and the tribe of their husbands. [Vanguard]