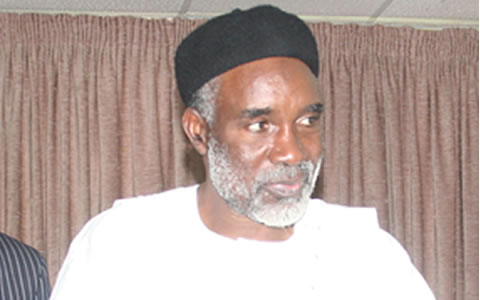 Governor of Adamawa State, Murtala Nyako, has urged the Chief of Air Staff, Air Marshal Alexander Sabundu Badeh to focus on his national assignment of repositioning the Nigeria Air Force (NAF) instead of meddling in the internal affairs of the state.

Nyako was reacting to reports in some national dailies which suggested that the governor was bitter about Badeh’s appointment by President Goodluck Jonathan.

The report accused Nyako of failing to host a reception in honour of Badeh over his appointment, adding that when the Chief of Air Staff lost his mother in July, the governor failed to attend the burial ceremony nor paid him a condolence visit. It further accused the governor of being uncomfortable with federal projects which the Air Chief had attracted to Yola, the state capital.

However, in an interview culled from LEADERSHIP Weekend, Nyako, a retired Vice Admiral and former Chief of Naval Staff, described the allegations as baseless, saying that he held no ill-feelings towards Badeh.

The governor, who spoke through his director of press and public affairs, Malam Ahmed Sajoh, said he was in Abuja when Badeh’s mother died and directed the deputy governor to proceed to Mubi to express the condolence of the state government to the bereaved family.

He said in a democratic setting “everybody is free to make statements including falsehood but the point is that every discerning mind knows that the deputy governor is always assigned to carry such duties on behalf of the governor when I have other engagements.”

Sajoh said contrary to reports that the governor is hostile to Badeh, the Chief of Air Staff has since his appointment, been showing disrespect to the governor.

“To set the record straight, the CAS has never conferred with the state governor on his dealings since he assumed office. He also never deemed it right to pay the governor a courtesy call whenever he is in town, only for some sponsored elements to go to the press  and make wild and uninformed allegations claiming that the governor was hostile to the CAS.

“Some people can go to extremes to promote mischief otherwise, even if Governor Nyako has not congratulated Badeh on his appointment, will that rub off his performance as the CAS?. Nyako’s acknowledgement or lack of it does not in any way improve or negate Badeh’s performance as CAS. The Chief of the Air Staff has his job well cut out for him, he has a role to perform and he is being appointed in line with his professional competency not on political patronage of his state.”