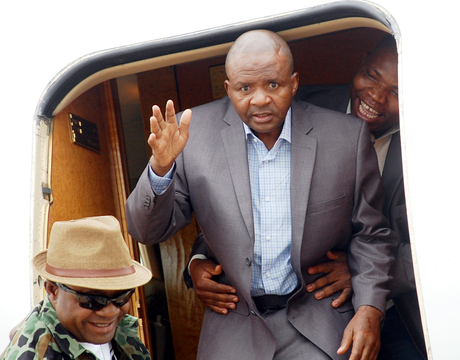 The fitness or otherwise of Taraba State governor, Danbaba Suntai has reportedly plunged the state House of Assembly into a crisis following a letter purportedly written and signed by the governor intimating the lawmakers of his readiness to take over affairs as chief executive of the state.

Suntai, it would be recalled, was flown back into the country on Sunday from New York after his 304 days sojourn abroad for medical treatment as a result of serious injuries he sustained from a plane crash which he piloted last October.

It was learnt that while the Speaker of the state Assembly, Hon. Haruna Tsokwa, believed to be the acting governor, Alhaji Garba Umar’s loyalist, stated that Suntai was unfit to resume duties on the grounds that the Assembly was yet to meet face-to-face with the governor with a view to determining his medical fitness, the majority leader, Hon Joseph Albasu, claimed that the governor was fit to resume work and that the Assembly had received a letter from him to this effect.

Albasu had told journalists in Jalingo yesterday that “We saw Governor Suntai in New York and now that he has returned, and judging from the conversation we had with him, the governor is sound to resume work”.

Showing the letter to journalists, the Majority Leader said the House has verified that the signature is Suntai’s.

According to him, “Whoever that is denying is only bringing confusion. The governor could have thump printed the letter, if he wished, provided forensic test shows he is the one.”

However, the Speaker insisted that the deputy governor, Alhaji Garba Umar, would remain in office as acting governor until further notice.

Tsokwa, who expressed worry at the political situation in the state, expressed concern that since Suntai’s return to the state, the leadership of the Assembly was yet to gain access to him, adding that despite repeated calls to his residence to see him, the governor’s wife – Hajiya Hauwa – had denied the lawmakers access to her husband.

Speaking to journalists in the state capital of Jalingo yesterday, the Speaker stressed that the political trend in the state is dicey and needs to be handled with care so as not to create anarchy.

Tsokwa described the earlier press conference by Hon Albasu as a calculated attempt to plunge the state into crisis.

The Speaker added that the delay in addressing journalists since the arrival of the ailing governor was a deliberate attempt to ensure that the Assembly is properly briefed on the correct position of the situation.

He implored those trying to foment crisis in the state to desist as what was needed from everyone at this point in time is prayers.