The Seme Customs Command has tightened security around the border, following the killing of a senior customs officer by a mob on Friday, to avenge the shooting of a smuggler by Customs Officers, with the Police said to have made a number of arrests in connection with the incident.

Speaking to Vanguard about the situation at the border, Public Relations Officer of the Command, Ernest Olottah, said “We are doing what we were doing, there is no unusual action. We have always taken security at the border post very seriously.”

Olottah refused to comment on whether the deceased Customs officer has been buried, and the condition of the smuggler shot yesterday.

He however noted that after the incident, the police have taken over and are involved in the investigation, adding that some arrests have been made in connection with the killing of the officer. 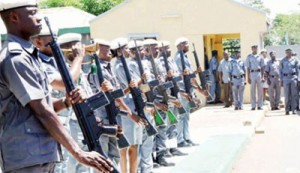 “It is worth noting that the intensification of our anti-smuggling operation which has led to the making of over 686 seizures since January 2013 has placed us on the danger of attacks like this from criminals who are being prevented from using the border for anti-economic and other nefarious activities,” a statement signed by Olottah yesterday said.

“Our operatives, due to their uncompromising stance against smuggling and protecting the nation’s economy have come under series of attacks by smugglers and some unpatriotic elements who see smuggling as their right. In some cases, attempts made at disarming some of our operatives in the recent past were rebuffed,” the statement concluded.