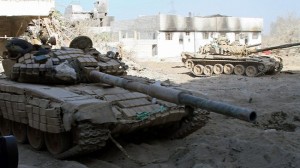 Following reports of an imminent Western strike over alleged use of chemical weapon by Syria, Damascus has vowed to fight off any Western military strikes with “surprise” defences, while raising the possibility of Islamists benefiting from such intervention.

“We have two options: either to surrender, or to defend ourselves with the means at our disposal. The second choice is the best: we will defend ourselves,” said Foreign Minister Walid Muallem.

He was speaking at a news conference as the US and its allies edged closer to launching strikes against the Syrian regime amid accusations it used chemical weapons against its own people.

Muallem said the government of President Bashar al-Assad, which has been fighting an insurgency for the past 29 months, had defences that would “surprise” the world.

“Syria is not an easy case. We have defences which will surprise others,” he said in Damascus.
Russian news agency Interfax said on Tuesday that Damascus government had enough air defence systems to rebuff attacks.

“If the US army together with NATO launch an operation against Syria, there won’t be an easy victory,” the agency quoted a military-diplomatic source as saying.

The Syrian minister said he was confident that Russia, a key ally of the Assad regime, would not abandon Damascus.

“I can assure you that Russia has not abandoned Syria. Our relations continue in all fields, and we thank Russia for its support,” Muallem told reporters.

Muallem also charged that strikes would benefit Israel and jihadist groups in the Middle East.

“The war effort led by the United States and their allies will serve the interests of Israel and secondly Al-Nusra Front,” an al-Qaeda-linked jihadist group in Syria, said Muallem.
He challenged Western states to present evidence that the Assad regime had used chemical weapons.

“We are hearing war drums around us. If they want to launch an attack against Syria, I think using the excuse of chemical weapons is not true at all. I challenge them to show what proof they have,” Muallem said.

The minister also said foreign military intervention in the country would not stop the government’s campaign against rebels.

“If they think they can stop the victory of our armed forces like that, they are wrong,” he stressed.
The minister was speaking as the US and its allies moved closer to acting against Assad’s regime, with the Washington Post reporting that President Barack Obama was weighing limited military strikes on targets in Syria.

After speaking to his British and French counterparts earlier on Tuesday, US Secretary of Defense Chuck Hagel said US allies and most of the world believed Assad’s regime was behind the deadly chemical weapons attack last week.

“I think most of our allies, most of our partners, most of the international community that we’ve talked (to) – and we have reached out to many – have little doubt that the most base, human, international humanitarian standard was violated in using chemical weapons against their own people,” he said.

He told the BBC the US would soon share evidence that the Syrian regime was behind the attack.