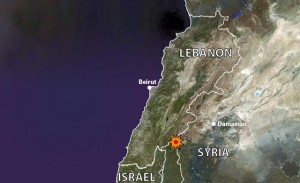 Nine Syrians have been killed and nine wounded in an army air strike on an area in eastern Lebanon.

A Syrian army aircraft fired a missile at a gathering of refugees east of the Lebanese city of Arsaal, which is home to thousands of Syrians who have fled fighting at home, Lebanon’s official National News Agency reported on Saturday.

Arsaal lies 12 kilometres from the border with Syria in a mainly Sunni Muslim area that supports rebels fighting forces loyal to President Bashar al-Assad. It was not the first Syrian army attack on Arsaal but is the deadliest so far.

The Syrian Observatory for Human Rights said at least one rebel was killed.

Syria’s state news agency SANA said an unspecified number of “terrorists” were killed in the clashes near Damascus.

Syrian government forces have retaken areas near Damascus from the rebels.

More than 100,000 people have been killed in Syria’s 28-month conflict, according to the United Nations.