Rivers State Governor and Chairman of Nigeria Governors’ Forum, Chibuike Rotimi Amaechi said his perceived misunderstanding with the First Lady, Dame Patience Jonathan arose out of his desire to provide a conducive learning environment for the children of Okrika, home town of the First Lady 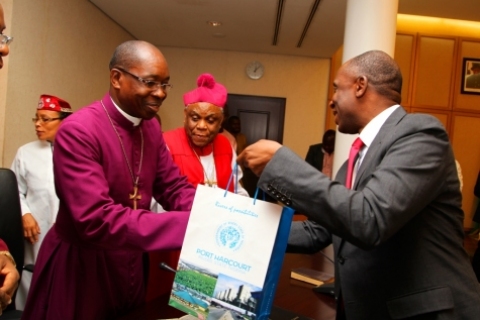 Amaechi said he has enormous respect for both President Goodluck Jonathan and his wife, Patience.

Amaechi said: “My lords, I don’t know what to say, believe me, the only thing I want to say to you is that and I want to be put on record that the wife of the President said when My wife came to beg me, I pushed her away. I have never quarrelled with my wife publicly, and I will never quarrel with my wife publicly. So there is no time I pushed my wife away, and there is no time I will push my wife away. I just want to correct that so that nobody goes away with the impression that somebody told my wife ‘go and talk to your husband, she came and I pushed her away’. No, that day I simply walked away into a bus and I sat down until they finished. So all I did was go back to the bus to enable my wife perform her official function of someone who had received the wife of the President and escort her to all the places she wanted to go to”.

“I hope that it (this mediation) will work. Niger Delta Monarchs came and no result came out of it and since you are men of God I hope that this one God will bless it. I hope so because that is the same way I spoke to them(the monarchs) and they said, ‘watch out, it will work’, and they never returned because it never worked. There are so many persons who had come to mediate but nothing came out of it. If it is peace that everybody wants, I am ready for peace. When you say you are seeking for permission, I am wondering why, because if you did not have the permission you would not have gone to see the wife of the President. The mere fact that you have seen the wife of the President means that you have initiated the peace move, so you don’t require any further approval than the approval of God that you have started with.”

“There are aspects of the story that is public that I need to correct. lord Bishops please allow me correct those ones too because when you spoke with the wife of the President she spoke publicly. She said and I concede to her when she said she is my mother. As wife of the President who is the head of government and head of the nation, she is my mother and you expect that as my mother she should be able to protect her son. No mother takes away a Police Commissioner to the detriment of her son, so when next you see my mother, please tell her that she should try and protect her son.

“The other aspect is the Okrika story when she visited. Like I said, as the governor, by protocol I will receive the President and you know that the President is not just our President, he is the head of the nation but when the wife of the President came I went to receive her at the airport and she slept in Port Harcourt. The next day she came up with a programme that was not part of the official programme, and what was the programme? She wanted her people to receive her in Okrika. There was no plan, there was no protocol arrangement, nothing. We just had to quickly arrange protocol to take her to the place.

That is where she said my wife met me and I never and will never, there was not even a public, how did the wife of the President know that my wife met me and I pushed her away when she was supposed to be in a public ceremony. Was she standing with me and my wife in that primary school and saw me pushed my wife away? So it is important that you get to know this and it is important that the public knows that the altercation between myself and the wife of the President was as a result of providing services to her place, the Okrika people because you must deal with the issue of paedophiles.

If you build a primary school and the place is surrounded by people who are cooking and selling and buying, that is not a conducive atmosphere for learning and we did not say we would come there with caterpillars and demolish, we say we would buy the houses from the people and pay them off to be able to get a football field and provide playground for the children and fence off the school so that we can protect them from paedophiles, that was what happened.

Governor Amaechi also spoke on the issue of Nyesom Wike, the Minister of State for Education whom he nominated for appointment as Minister.

Nyesom Wike as a Minister of State, I nominated him. I was under pressure by the President to drop him, I refused. The President persuaded me to drop him and bring a woman but I refused. I hear he is going all over town saying I didn’t appoint him. I didn’t appoint him, the President appointed him but I nominated him to be a minister him as the Chairman of Nigeria Governors’ Forum. I did but you know, character doesn’t come easily, character is a very difficult thing and I am a man of character”, Amaechi said.

Earlier, the leader of the delegation, Rt. Rev. James Aye Oruwori said they came because they needed the governor’s permission to intervene in the prolonged crisis in the state and the dispute between the governor and the First Lady.

They said they took the challenge to intervene in the crisis without external influence, having also visited First Lady, Dame Patience Jonathan, to restore the peace that existed in the state.

Rt. Rev. James Aye Oruwori said: “On behalf of the Niger Delta Bishops’ Forum, we came to visit with you (Amaechi). We want to first of all appreciate your gracious approval of our coming. Summarily, to say why we are here, we, before I go into that, let me please say that our coming is not influenced by any person, our coming is not sponsored by any person but because in a home where there are fathers, peace is always maintained and because we have observed that there had been some challenges to the people of Rivers State then to the entire Nigeria, we feel agitated in our spirits

“It is not an exaggeration to say that we have been praying but then prayer without faith is classified as dead and it is on this note we have taken upon ourselves to make a move to seek for peace. The scripture says precisely in Matthew 5:9 that ‘Blessed are the peacemakers, for they are the children of God”.

“The best thing to do, we felt is to first of all come to you and to say we would want to intervene in this matter believing that there is nothing impossible with God. We just feel that if this matter is allowed to escalate, the matter is something that will not affect only we that are living but even our children that will be born tomorrow”.