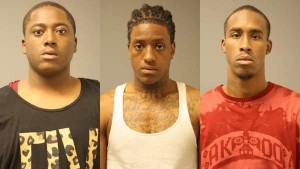 Weapons charges have been filed against three men caught toting real guns while filming of a rap video on Chicago’s South Side, according to police.

The three were among eight people arrested by cops around 3 p.m. Tuesday in the Englewood neighborhood. The other five do not face felony charges.

Police said the crew was filming a rap music video in the backyard of a home when officers made the arrests.