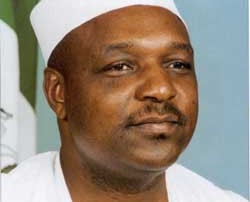 Nyame, who was governor of the state in the short-lived third republic from 1992-93 and 1999-2007 under the platform of the PDP, had earlier decamped to the opposition Action Congress of Nigeria (ACN) to contest the Taraba North Senatorial election in 2011 but lost to Senator Jummai Aisha Alhassan of the PDP.

Receiving the former governor back to the party of which he was one of its founding fathers in the state on Friday, the Zing Ward Chairman of the PDP, Ismaila Mijinyawa expressed joy at the return of Nyame describing the move as the ‘will of God.’

Nyame while speaking with journalists stated that he might give the Senate another shot in 2015 if called upon.

On why he left the PDP, the former governor explained that he decided to step aside from the party ‘as a matured person’ due to what he described as ‘pressure’ which he did not want to contend with at that time.

Information Nigeria reports that Nyame’s dramatic return to the PDP might not be unconnected with Gov. Danbaba Suntai’s – who he installed as governor – prolonged absence from the state as the pair fell apart soon as Suntai settled into office and began to build his own political structure independent of his predecessor.