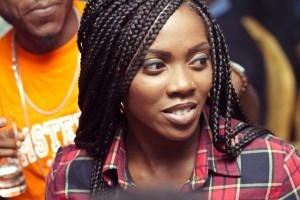 First femaleAmbassador for Beverages company ”Pepsi” and First lady of Marvin Records Tiwa Savage, was recentlyinterview by StyleMania magazine for their latest edition and was ask various question including her view on separation between two music luminaries and founders of defunct Mo’Hits Records should they come back together. Duo of D’banj And Don Jazzy make various Headlines about few days ago, when both of them performed together at D’banj Sister White Wedding at The Grandeur Event Center, Ikeja, Lagos.

“I am still in shock and when I listen to songs like Suddenly, I am like is this really happening? And I feel like they have left a void in the music industry in Nigeria and in Africa,” Tiwa said in a special feature on her in the latest edition of StyleMania magazine. The songstress said she could not really point to what caused the rift between the two friends beyond different news reports she read in the media.

Tiwa, however, admitted that in line with some people’s perception of Don Jazzy, the super producer is indeed a “mysterious” guy.

“I’ll tell you the honest truth about Don Jazzy…he really is like that. He doesn’t really open his heart easily to people. He just accepts what happens and he moves on. I mean he is the Don, so I can’t go up to him and say ‘Jazzy, what really happened. I just keep my mouth shut,” she said.

In the interview, Tiwa defended the open show of sensitive body parts in her video which has attracted a lot of flaks.

“You know a lot of people say that in Africa we don’t like to expose ourselves and that is actually a big lie because if you check the history of Africa, we were actually very exposed. So I think it is quite ironic because people think that the western world is influencing us whereas we are the ones influencing the western world,” Tiwa argued.

Do you think these guys should just forget their pride and work together again?