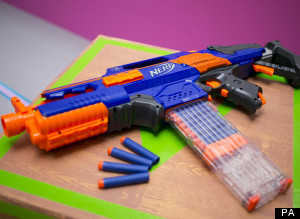 Police say confusion over a phone message about a toy gun fight prompted a false report of a shooting at a Cleveland-area school on the first day of class.

Emergency responders in Elyria (eh-LEER’-ee-uh) rushed to Open Door Christian School and Church and put it on lockdown Wednesday after getting a report of a shooting. Officers were relieved to discover the altercation actually was a Nerf gunfight in the church area.

The response stunned staff at the school, which resumed classes after a 15-minute lockdown.

Police determined a church secretary’s daughter had called authorities after misinterpreting a phone message her mother left about the toy gunfight.

Police Capt. Chris Costantino says the daughter was concerned and did the right thing.