A ‘mischievous’ schoolboy accidentally hanged himself while trying to play a prank on his brother and father. 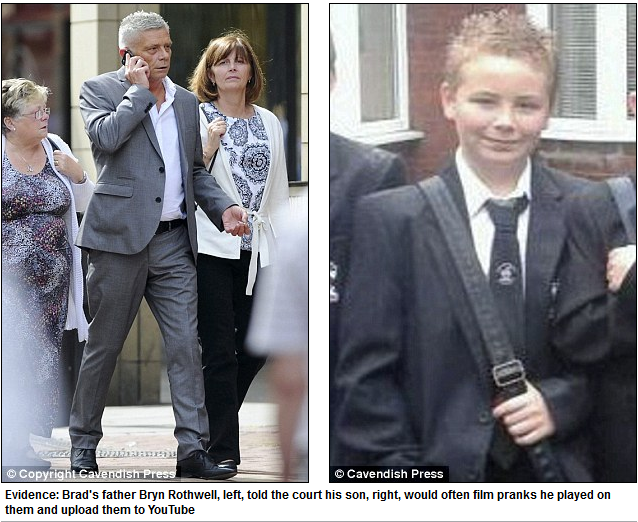 Brad Rothwell, 11, was trying to trick his father, Bryn, and brother, Brett, when they returned from running errands but the game went tragically wrong.

As they entered his bedroom at the family home in Wigan, Greater Manchester, they found him tied to his bunk bed and unresponsive.

They dialled 999 but despite efforts to revive him with CPR, and the attentions of paramedics, Brad was pronounced dead at the scene.

Coroner Alan Walsh heard evidence that the ‘model pupil’ would often play pranks on his brother and father and upload the videos to YouTube.

Police examined Brad’s laptop and phone and found no suicidal notes or evidence of planning and researching to take his own life.

The inquest was told that he died two years after his mother Joanne, 44, lost her battle with cancer.

Mr Walsh said the case was ‘unimaginably tragic’ adding: ‘Pranks can get out of hand, he wasn’t able to save himself.’

Brad had 14 videos on YouTube, including one called ‘The best hidden jump’ which saw him film himself jumping out of a wardrobe to startle his brother.

Giving evidence at the inquest in Bolton, Greater Manchester, Mr Rothwell, 55, said that on May 13 this year, Brad returned home from school and everything was normal.

His sporty and popular son came in and after dinner he was asked to tidy his room – but was later caught playing on his mobile phone.

The dental technician said the boy would often look up funny videos on YouTube on his phone and laptop.

He added: ‘I asked him to go get is stuff out of his room so I could get the washing on.

‘But when I went upstairs he was sitting on his mobile phone. I took it off him, he didn’t object, I’d done it a few times. He was always looking up funny stuff and doing what kids do.

‘I was going to do errands with my other son – I was just dropping some work off and coming back.’

Mr Rothwell and Brett were gone for more than an hour and when they came back to their home they discovered Brad hanging from the top of the bunk beds.

He said: ‘As I pulled up to the drive I got a text off my girlfriend so Brett jumped out and ran inside. He immediately shouted for me to come. I just thought he was messing about, but I ran upstairs and found him.’

He added: ‘He had done videos on YouTube, jumping out of wardrobes, scaring his brother. He would say to me “don’t tell him I’m upstairs” so he could jump out at Brett. It could be another prank that he could have been thinking about.’

Detective Inspector Iain Butler said Mr Rothwell pulled his son down from the bunk bed and attempted CPR, until emergency services arrived – but the boy was pronounced dead at the scene.

Recording a verdict of accidental death, the coroner described the Brad’s death as a prank gone wrong.