Pandemonium broke out in Aka Town, Iba Local Council Development Area, LCDA, Lagos State, yesterday, after an electrician, Mr. Adamson Bello, was allegedly shot dead by a yet to be identified policeman attached to the South Bound Hotel. 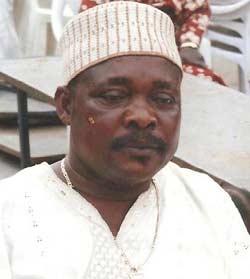 The incident which occurred at about 9:00 pm on Sunday at the hotel, located at 5, Elias Lane threw the entire town into mourning, as many were yet to come to terms with the reality  that Adamson, who was popularly called Baba Fasilat, could be shot dead innocently.

When Vanguard visited the scene, it gathered that the deceased was said to be sitting at the front of a provision shop less than 10 metres from the hotel, where he was hit by a bullet.

It was further learnt that the body of the deceased had been deposited at the General Hospital, Badagry morgue.

Vanguard further learnt that youths who were angered by the action of the policemen vandalized and carted away several property from the hotel that was opened less than a month ago.

Sources also said that some arrests had been made and the suspects were currently being detained at the Okokomaiko police station for interrogation.

According to Mr. Adedayo Fatai, “Baba Fasilat was shot dead by a police officer attached to the hotel.

“I was standing few metres beside him and when we heard the gun shot, everyone scampered for safety. And when we returned to the scene, I saw him on the ground in the pool of his blood.”

Explaining how it happened, Mr. Buchi Okechukwu said: “The hotel commenced their usual night activities as early as 7:00 pm. And at about 8:30 pm when some youths were also trying to gain entrance into the hotel, the police officers at the gate denied them access, saying the dance hall was already filled to capacity.

“But the youths turned down their plea, arguing that there was still space in the hall that could accommodate more customers.

“As the argument dragged on, the policemen began to shoot sporadically in the air to scare the youths away. But it boomeranged as the police officer shot straight at Adamson who wasn’t involved in the scuffle.”

Son of the deceased, Afeez,  said: “He bidded us goodbye when he came to check on me where I had gone for my disc jockey business. And few minutes after, I received a call from my sister that policemen attached to the hotel had shot my father in the neck.”