Two suspected members of the Boko Haram sect were on Thursday, August 22, arrested by the vigilante group, Civilian-JTF, and handed over to soldiers in Maiduguri, the Borno State Capital. The suspects were then shot dead by the soldiers. 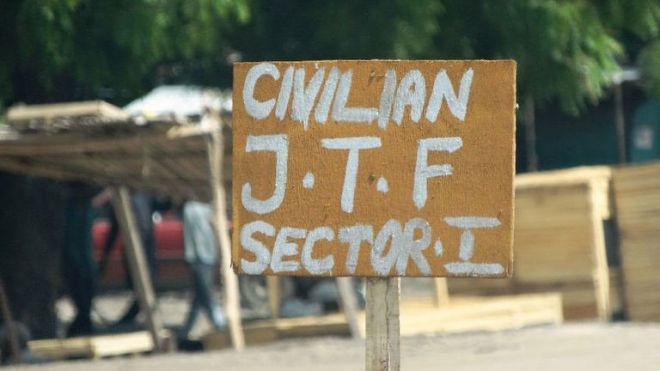 It had been previously feared that the insurgents may be dressed up like Muslim women in veils to avoid arrest.

The decision of the insurgents to disguise their appearances followed the increased clampdown on them by the Civilian-JTF.

On Thursday, two of such cross-dressers – who were said to be residents of Shehuri area of Maiduguri, both in their early thirties – were arrested on their way out of the city to Konduga by the Civilian-JTF. It took a while to convince witnesses that the two young ladies with voluptuous breasts and heavy waists in reality were men.

According to a Civilian-JTF operative, Isa Aliko, the two cross-dressing men were captures thank to a tip-off from some young men who hung around the Shehu of Borno’s Palace.

“We know all of them and when we were given the hint that they were dressed like women and covered with Hijjab, we launched a search for them until we finally caught them at the outskirts of the town,” explained Mr Aliko.

The two men wore heavy makeup, ear rings and head ties with two big oranges each in their brassieres masquerading as breasts. It is reported that, after they were caught, the suspects were beaten by Civilian-JTF members before they were handed over to soldiers who subsequently shot them dead.

It will be reminded, that on Monday, August 19, the Boko Haram’s leader that Abubakar Shekau has possibly died of gunshots received in an encounter with JTF in one of their camps at Sambisa Forest on 30 June 2013.

Borno is one of the three states under emergency rule for more than three months, since 14 May 2013. The other two states are Yobe and Adamawa. Boko Haram’s insurgency has killed at least 3,600 people dead since 2009, including killings by the security forces.