Two persons were seriously injured in a shootout on Thursday between Fulani herdsmen and some youths in Umuekune village of Irete community in Owerri West local government area of Imo State.

According to reports, the incident occurred on Thursday evening when the cattle herdsmen encroached into farmlands in the community destroying valuable crops and economic trees in the process. An attempt by youths in the community to stop the invasion of their farmlands resulted in open confrontation.

Chibuzor Hezekiah Okorie, one of the victims of the violence and a native of the area, was shot in the stomach and matcheted by the herdsmen just as he lost a toe in the attack. Another person identified simply as John, an artisan, who moulds block, suffered severe machete cuts on his two hands and other parts of his body.

***WARNING! SOME MAY FIND THE IMAGE BELOW DISTURBING*** 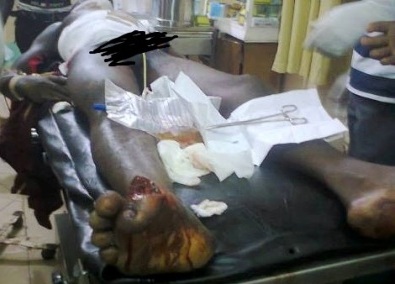