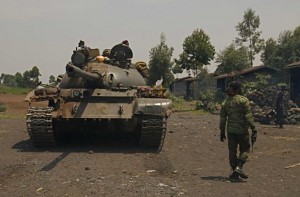 Fighting from the war in eastern Congo that pits UN and Congolese forces against rebels has spilled over into Rwanda.

Authorities say 10 shells landed in a Rwandan border town and a nearby village, killing at least one person.

Rwanda, which the UN accuses of backing the rebels in neighbouring Congo, blames the Congolese military for the shelling and has threatened retaliation.

Rwandan Foreign Minister Louise Mushikiwabo said the shelling has killed a woman and seriously injured her two-month-old baby in a market in Rubavu town.

Sheik Hassan Barame, the mayor of Rubavu, located 3km from the Congolese city of Goma, said both the mother and her baby were killed when the rocket landed in the market.

Goma, a city of one million, briefly fell to the M23 rebels last year.

M23 said in a statement on Thursday that the shells being fired into Rwandan territory were a deliberate attempt to draw Rwanda into the fighting.

Combat is continuing in eastern Congo, with officials confirming two shells had landed in two separate neighbourhoods in Goma overnight, killing one person and wounding at least eight.

That brings to 13 the number of people killed there by shelling from rebel positions north of the city in just over a week.

The fighting is taking place just outside Goma and although it is heavily fortified, shells and mortars have repeatedly been fired over the city’s defences, landing in neighbourhoods of tin-housed roofs.