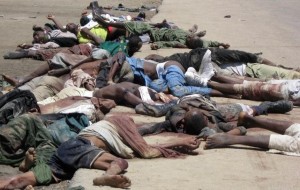 The United Nations and the United Kingdom have condemned the massacre of 44 people in Borno State who were killed as they prayed in their mosque by the Boko Haram Islamic sect last Sunday.

Gunmen wearing Nigerian army camouflage fatigues struck under cover of darkness as residents were saying their dawn prayers at around 5:30 a.m. last Sunday, just as another 12 civilians died in a simultaneous attack on Ngom village just outside Maiduguri, .

“Attacking innocent people in a place of worship is a contemptible and cowardly act,” the Foreign Office Minister for Africa Mark Simmonds said in a statement Tuesday.

He said Britain “stands with the government and people of Nigeria as they seek to reduce violence in the north east of the country.”

A report in UN News Centre yesterday said the Secretary-General Ban Ki-moon in a statement signed by his spokesperson called on all extremist groups in Nigeria to cease attacks, after 44 people were killed in Borno State, including worshippers reportedly shot to death while praying inside a mosque.

“The Secretary-General strongly condemns the recent violent attacks that have killed scores of civilians in the localities of Mafa and Kondugo in Borno State,” his spokesperson said in a statement.

Ban therefore called on all parties to resolve their differences through dialogue and other peaceful means.

“The Secretary-General reiterated his firm conviction that no objective can be attained through such violence,” the spokesperson stressed.

Meanwhile, Nigeria’s Interior Minister, Abba Moro, has dismissed the attack in the mosque and the Boko Haram threat as “desperate” and “isolated”.

Abba Moro in his reaction told the BBC’s Focus on Africa programme yesterday that, “The security agencies of Nigeria have been able to push the Boko Haram sect from their major strongholds”.