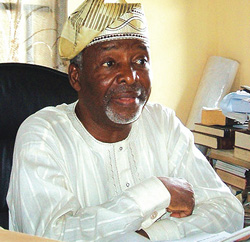 Founder of Oodua Peoples Congress (OPC) and National chairman of the yet-to-be registered Unity Party of Nigeria (UPN), Dr Frederick Fasehun, has debunked the allegation that the party is an appendage of the Peoples Democratic Party (PDP), saying UPN “is not a disciple of any bad government.”

UPN, which has its roots firmly in the South-West, has often been touted by some politicians as being promoted by the ruling party to break the monopoly of Action Congress of Nigeria (ACN) now All Progressives Congress (APC) in the region.

But Fasehun, who made the clarification at a press briefing in Lagos, said it would be uncharitable for anyone to link the UPN with PDP when the party’s agenda and manifestos are different from that of the ruling party.

“Nigeria is a free country. I could have joined PDP ab initio. Nothing stops me from joining PDP if I want to join. But that I have gone to found a political party that its ideologies and programmes are different from that of the ruling party at federal level should convince anyone that I’m not a political disciple of any bad government. I am not a disciple of anybody. I am on my own. I am on my own and for the umpteenth time I am on my own,” Fasehun stressed.

The UPN chairman noted that the party shall continue to work for the unity of Nigeria because its commitment has been enshrined in its constitution, manifesto and slogan.