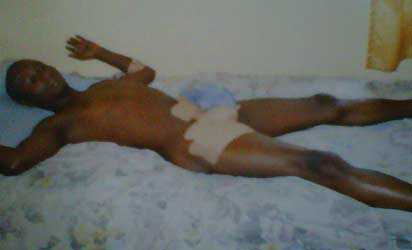 The day started like every other day filled with promises and high hopes for 34-year-old Tayo Ajasa, but ended in gloom.

Ajasa left his house at about 11pm on August 5, 2013 to find something to eat, little did he know danger lurked around the corner at the Janet Fagbemi street where he was shot.

Having returned late from work, it was gathered that the Ogun-state born father of two who is also a driver, went to a food vendor in Diamond estate, Amuwo-Odofin, Lagos, to get something to eat for his late dinner.

He was about being handed a plate of noodles he ordered for, when a drunken man later identified as Corporal Mohammed Abubakar, attached to Mopol 17, Ondo State, shot indiscriminately at everyone on sight. Like everyone else, he took to his heels.  Unfortunately for him, the plain-clothed police man shot him at close range.  Bullets pierced his  thigh inflicting grave injuries to his  groin and left arm.

Consequently, Ajasa was rushed to St. Jude’s Hospital in Festac Town,Lagos where after obtaining a police report at the clinic’s request, he was admitted and is currently receiving treatment.

Ajasa who told CrimeGuard that he was full of gratitude to God for sparing his life, because he lost hope of surviving, also stated that even though his condition had improved, he was saddled with the burden of clearing his medical bills. “As you can see, I am getting much better compared to when I was first rushed here last week. I am thankful to God and also to my friends who spared no time in rushing me to the clinic.

“Although when they brought me here, the hospital management asked us to go and get a medical report from the Police station. We went to Festac Police station and they issued us one. They started treatment when we came with the report and the next day, I was operated upon.

“My only fear now is the issue of paying up the bills. Without being told and judging by the quality of treatment I am receiving here, the bill must be on the high side. I am just a driver; I cannot foot the bill. I need the police authority that the perpetrator represented to  come to my aid.

“This incident has caused I and members of family much ordeal. As it is now, I don’t know if I will be able to father any more children in future. I did not bargain for this,”the father of two lamented.

The Chief Medical Director of the hospital, Dr. Jude Mbama who spoke with Crime Guard stated that though the clinic requested for a Police report when the victim was initially brought in at about 11:45pm on  August 5, 2013, in a pool of his blood, they swung into action as soon as he was brought back with the report.

Dr. Mbama also started that Tayo’s situation was very bad when they first brought him “but by God’s grace, we were able to get him to the state he is now.

Sadly, despite the efforts of the medical team at St Jude’s, Ajasa’s reproductive organ has been damaged, as his right testicle was badly affected.

“Another challenge we face here is the bill settlement, Mbama said. “But like medical ethics demands, our main focus is to get the victim back to his feet within the next couple of weeks, then we will decide how best to sort that out,” he said. [Vanguard]