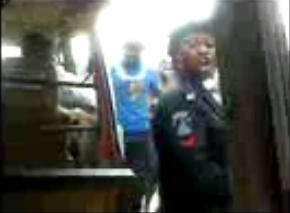 Is thunder about to strike twice in the same place in a space of two weeks? Just as Nigerians were yet to fully absorb the show of shame by a police sergeant, Chris Omeleze, who was recorded on video demanding bribe of N25,000.00, another footage showing a policewoman negotiating a bribe of N100 has surfaced on YouTube.

From the not-too audible conversation, it appeared the policewoman had apprehended the bus for an offence and sat inside with passengers watching while she and the driver engaged in a shouting match.

She could be heard saying ‘na two ‘O’ clock I dey close’ suggesting if the driver wanted to waste his time, she was more than willing to oblige him.

The driver, who hinted that he had paid bribe money earlier got infuriated and slammed the policewoman, saying, “I no give Kemi money dis morning? Don’t abuse me because of N100. How much is N100? Me I don pass N100” to which the policewoman replied, “E no concern me. Pay me my own money.”

When the driver realised that the policewoman was adamant on collecting the bribe, he asked his bus conductor to give her the money.

“Give her N100. I will return it to you later,” the driver said in Yoruba language. As soon as the driver handed down the instruction, the policewoman stretched her hand towards the conductor to collect the money before she alighted from the bus and walked away banging the body of the bus with the baton in her hand.

The video which was shot by a passenger in the back seat of the bus, showed the policewoman rejoining her colleague, another policewoman.