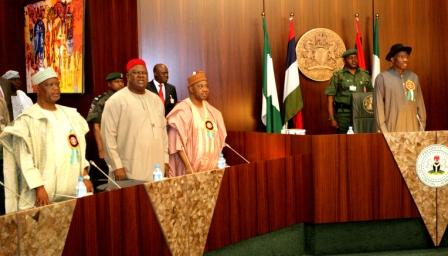 The weekly Federal Executive Council (FEC) meeting was suspended because some Muslim cabinet members have travelled to their home states for the Eid-el-Fitri.

The Special Adviser to the President on Media and Publicity, Dr Reuben Abati, disclosed this to State House correspondents on Wednesday in Abuja.

According to Abati, some other council members are also taking part in the lesser Hajj in Saudi Arabia.

He said it is part of the cabinet members’ constitutional rights to carry out their religious obligations.

The meeting, which holds on Wednesdays, is normally presided over by the President or the Vice- President.

Earlier today, President Goodluck Jonathan was in Lagos to commiserate with Governor Babatunde Fashola over the death of his father, Alhaji Ademola Fashola. (NAN)