Popular actress, Moji Olaiya, in a recent interview talks about her career and why she walked out of her marriage. 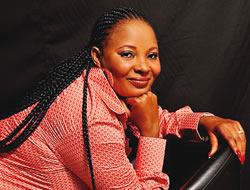 You are in a soon to be released soap, Glass House. How did it come about?

A producer we call Jerry (Isichei) produced it. I am a major cast in the series.

Most people know you as a Yoruba actress, but you are now featuring in an English series…

But this is not my first job in English. Don’t forget that I came to the limelight through Super Story and which of course, was in English. I am also in Nowhere to be Found, which is another popular soap.

Yes, and it was very challenging. I got married to a bank chairman in the series and I am also a publisher. I played ‘Moji’ even in the series. The character is just a very funny person. I must tell you the soap is very interesting. I am very happy I played that part.

You have not produced any movie in recent times…

The last movie I produced was last year and it even won an award. It was premiered in Canada at the Toronto film festivals. The market is not really encouraging now. That is why most producers are really calming down to see the outcome of this piracy issue. That is why most people are not doing movies now.

Are you saying you didn’t make enough from your last movie?

But  it wasn’t nominated in any category…

I don’t know what happened. As far as I know, it was well shot. It had good picture quality.

Will you say your father’s name has opened a lot of doors for you?

I’ll say yes. Let’s take for instance my state, Ekiti State. Most things they call my father to do, because he is old and cannot be travelling up and down, they call me to do them. I even remember the first time I went to the German Embassy for a visa. Getting the visa was very quick because the lady that attended to me knew who my father was. I got the visa. I am proud to be associated with him as somebody I can call my father. There are so many legends out there, yet their children are not proud of them.

Granted your father is a showbiz man, but most of your siblings are in other professions. How come you are the one that went into showbiz?

I think it is where God wants me to be. It is my destiny. When I was little, I loved entertainment. I was called to act and sing in my church when I was little. Growing up though, I never had the intention of acting. However, along the way, I got into it. I’ll just call it luck. I have no regret. If I should come back to this world again, I still will love to be an entertainer.

What really happened to your marriage?

You see, I am an advocate of marriage. I preach that women should be in their husbands’ houses. All my life, I have always wanted to get married and stay with my husband and bring my children up in the fear of the Lord. But along the line, things didn’t work out. I don’t even want to get into the details so that it doesn’t get messier. But things didn’t work out.

So you left your marriage because ‘things didn’t work out’?

If things are not really working out, I think the best thing for you to do is to quit and leave everything in the hands of God.

Be sincere, whose fault was it that it didn’t work out?

I don’t think it was my fault. I didn’t have any fault in the marriage. However, I will not blame the other party. I really want to keep this off the press as I have been advised by my family. It just didn’t work out.

I don’t think I will get married and say that I don’t want to stay in my husband’s house. It is only a senseless person that will do that. I am in my late 30’s. Why would I, at this age, not want to be in a husband’s house? It’ll get to a time that you will need a man. But when you get the man and things are not working the way you planned and you know you still have a long way to go in life, you have a fruitful career, then the best thing for you to do is to quit the marriage and let the man go.

Is it possible for me to get married to someone else when I am not officially divorced? I don’t know how people think. I don’t have anybody in Canada and I have never dated anybody in Canada. Even people who know me are not usually aware when I am in Canada. Canada is my second home, but I am always inside. I really don’t know where they got this false story from.

But are you planning to get married soon?

I am not planning to get married soon. And just to get it straight, I am just separated from my husband. I am not legally divorced and I don’t have any lover anywhere.

What if you and your husband make up eventually?

Well… I will not say anything about that. I just think we should leave everything to God. Let him perform that wonder that He wants to perform. I believe that He is up to something.

When things you didn’t plan for happen, it will hurt you especially with all the things happening in our industry now. People think we are not serious and we don’t understand the institution of marriage. That is not so. My parents weren’t separated. I was brought up properly. My siblings are married. It is painful when you get married and you eventually leave that marriage because of something that is beyond your control.

You used to say you are an evangelist

I am an evangelist. I am a strong Christian. I preach on TV. So what am I teaching the younger ones? Am I telling them that marriage is not good? No. So I feel pained that this is happening. It is good to be married. It is good to have a crown over your head, somebody that can control you and you bear his name. It is painful; I know I am a role model to so many people. I know some people’s impression about me will be affected. But I know best and I know why it happened. I am sure that God will not even be angry with me that I made the decision at that time.

I am sure I have not made the wrong decision. I would only tell my fans that I didn’t enjoy doing this but they just have to support me and pray along with me. I am an advocate of a peaceful marriage. Women should be married. I am not speaking for anybody but my colleagues whose marriages broke up know why they left their marriages. I did what I did because it was the best thing I could do.

But every lady needs a man beside her. How will you be managing?

I didn’t say marriage is out of the way now. Now that I got married and it didn’t work out, I have to be careful the next time. I have to choose well so as to avoid the first mistake. I am just taking my time. And in fact, God might even tell me to go back to my first marriage, He can also tell me to move on. So let us just leave it for God to handle.

Could it be your profession that affected your marriage?

I don’t think so. While I was with him, I didn’t feature in so many movies. I just faced my marriage. It was just recently that I started featuring in movies. I never went for awards or functions. I wanted that marriage to really work. However, he even met me as an actress. I couldn’t have left my career because of marriage. In fact, I cannot leave my career for any marriage, no way! Even if I am getting married to the richest man, I don’t think he will tell me to quit acting.

Did he ask you to stop?

He never asked me to stop acting. We never had any issue concerning my career.

We know Fathia Balogun is your friend. Could it be that you decided to leave your marriage because your friend is also separated from her husband?

Fathia is my friend, I cannot deny that. But I couldn’t have left my marriage because hers didn’t work out. It is wrong for anybody to think that way. She knows what happened in her case, I know what happened in my own case. Come to think of it, when I go on set, I just want to face my business and get out. I don’t listen to gossip. I don’t know who is fighting over men. I just do my job and it is over. I don’t believe that anybody in her right senses will fight over a man.

Were your parents in support of the separation?

I didn’t take the decision alone. But I think I will leave this out of the papers. I am an advocate of a good thing. I will get married again. I have to know what I want. I have to know who the person really is before I get into it.

Didn’t you know who he was before you got married to him?

I can’t really say I didn’t know who he was. But things just happened. God knows best. Let us just leave it at that.

Did you have any children?

Could it have been the reason for the break up?

No way. He is not God and I am not God. The marriage was just three years. We have seen couples who didn’t have kids for so many years and they didn’t break up. Not having kids couldn’t have been the issue because I know I don’t have a problem. He doesn’t have a problem too. He has two kids and I have a kid before we got married.

Do we see you doing another thing apart from movies?

Yes. I will start events management. I will open my business very soon.