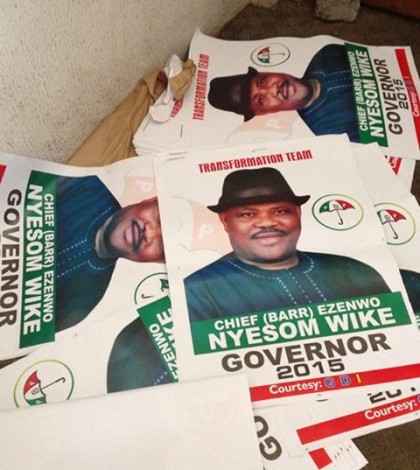 The attention of the Minister of State for Education, Barrister Nyesom Wike has been drawn to campaign posters bearing his image and purportedly declaring for the 2015 governorship election in Rivers State under the banner of the Peoples Democratic Party (PDP).

In a statement emanating from his office and signed by his Special Assistant on Media, Simeon Nwakaudu, Wike not only distanced himself from the circulated posters but blamed the development on his political enemies.

“This is an orchestrated plot by the minister’s political opponents and hired mercenaries to disparage Hon (Chief) Nyesom Wike”, the statement reads in part.

It further described those behind the circulation of such posters as “bad losers because the Rivers people and indeed, all Nigerians are better informed and too knowledgeable to be deceived by such fluke, stressing that the action had no other motive than to present the Honourable minister of state for education as an over-ambitious politician”.

While calling on the general public to disregard the posters wherever they were being circulated, the statement noted that “they have nothing to do with the Honourable Minister, who could not have indulged in any act aimed at flouting the ban on 2015 political campaign by the INEC, and is in a better position to know than his avowed enemies”.

The statement, therefore, warned the plotters to desist from the cheap blackmail aimed at over-heating the polity, reassuring that the Minister was too committed to the success of the transformation agenda of President Goodluck Jonathan to indulge in frivolities.

Information Nigeria recalls that the Minister and Governor Rotimi Amaechi have been embroiled in a battle of supremacy in recent times of the control of party structure in the state in preparation for the 2015 general elections.