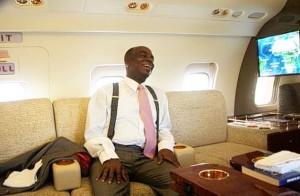 According to UK officials, they are concerned about the nature of the transfers involving Winners Chapel London with registration number 1134421 and it’s World Mission Agency. The case which is being handled by UK Charity Regulatory Commission is seen by authorities as an abuse of the law governing religious activities in the country.

In a statement, the commission stated that it has a regulatory case with the World Mission Agency (1085902)/Winners Chapel London (1134421), and has considered documents and information shared by the trustees “and our case is continuing.”

“The concerns that we are looking at are issues of conflict of interest, an allegation that charitable funds have been misapplied and concerns about the reputational management of the charity. We cannot share further information while our case is underway and cannot put a timescale on our case at this stage,” the commission further explained.

A press officer in the commission, Tallulah Perez-Sphar said, “the commission became alarmed when it discovered that there were instances where money transfers involving the church appear shady.She observed that by the virtue of the commission’s powers to keep an eye on all charitable ventures, it had to open a case against the church “after several complain and allegations trailing its activities.”

According to Perez-Sphar, “the case relates very much to how those charities are being managed and it involves transfer of funds,” she added.

It is believed that Oyedepo’s Winners Chapel in UK raised about £16 million between 2008 and 2012, part of which was said to have been transferred to the Nigerian church’s headquarters.

According to sources, the church’s financial activities shows that the World Mission Agency has approximately £8.6 million in assets and capital. Most of the funds from the UK church have been channeled to Nigeria.

Reports also have it that a large chunk of the funds were transferred in questionable circumstances to the Nigerian church authorities between 2009 and 2012.

The said sums were said to have been meant “for charitable activities in Africa, welfare assistance for undisclosed purpose, including some payment made as special privileges to certain members of the church.”

Oyedepo who is estimated by Forbes Magazine to be worth £90 million, about $140 million owns one of the biggest churches in Africa, located in the outskirts of Lagos.

His church in Cameroon was one of the over 100 Pentecostal churches shut by Presdient Paul Biya over “criminal activities”.