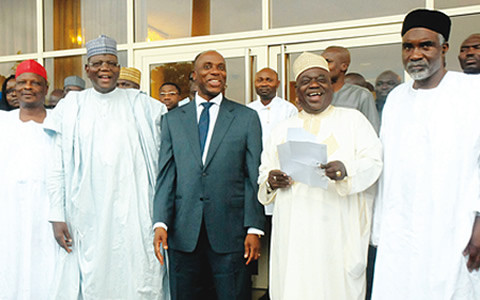 Special Adviser to the President on Political Matters, Ahmed Gulak, on Monday accused the five northern Peoples Democratic Party (PDP) governors, who recently embarked on nation-wide consultations to douse the political tension in the country, of disrespecting President Goodluck Jonathan.

Gulak, speaking through his Political Affairs Assistant, Godwin Akpovie, was reacting to a statement in which Gov. Lamido made reference to him as “a boy.”

It would be recalled that the Jigawa governor had taken the presidential aide to the cleaners for asking that the differences between the five governors and the President be settled internally instead of embarking on national consultations.

But apparently taken aback by the statement, Lamido described it as “offensive and disrespectful” coming from that “boy”, Gulak.

But Gulak on Monday wondered why the governor was asking for respect when he and his other colleagues had not shown same to the President.

He said, “The other day, in company with some other governors, led by Governor Rotimi Amaechi of Rivers State, they (the five northern governors) walked leisurely into a function in which President Jonathan was already seated.

“Is that not an affront to the office of Mr. President? How many of them will allow their commissioners to walk into a function in which they are already seated?

“As part of resolving their so-called differences with Mr. President, they are demanding the sacking of some key personnel in Mr. President’s administration, including Alhaji Bamanga Tukur, the National Chairman of the Peoples Demoratic Party.

“Again, can anybody, including Mr. President, order them to appoint so and so individuals as commissioners in their respective states?”

He also accused the governors of keeping quiet when the interim chairman of the All Progressive Congress, Chief Bisi Akande, called Jonathan a ‘kindergarten’ President.

“If l may ask; are they still members of the PDP? If they still are, why are they more critical of the President than even the opposition?

“Respect is reciprocal. Anyone who wants to propagate equity must come with clean hands. You cannot demand respect when you refuse to accord same to a higher office.

“Besides, what is disrespectful in advising that it is more decent to explore and exhaust all internal mechanisms to resolve any perceived grievances?” He queried.