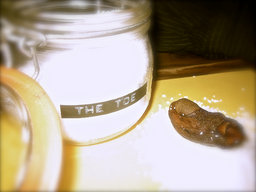 An American man is the newest member of the “Sourtoe Cocktail Club” — except, instead of touching the severed human toe to his lips, he downed the digit floating in his whiskey shot.

The Sourtoe Cocktail has been a tradition at the Downtown Hotel bar in Dawson City, Yukon, since 1973, when, as the story goes, a local named Captain Dick found an amputated toe preserved in jar.

That first toe lasted until 1980, when a man going for his thirteenth Sourtoe swallowed it by mistake.

But the American customer made no mistake on Saturday, said Terry Lee, the “toe captain” that night. He slugged the shot, chased it with a beer, then slammed five $100 bills on the table — the fine if the toe is “taken into the mouth, bitten, chewed or swallowed.”

The bar has now raised the fine to $2,500 and pulled out the backup toe, but they need more.

Selling anywhere from 30 to 50 Sourtoe Cocktails a night — as many as 124 on one occasion, Lee said — means the one toe will begin to degrade.

Anyone wishing to donate a toe can contact the hotel.

Lee says he’s already promised to give up both of his.

“If there’s an afterlife, I’d be up there in heaven or wherever, looking down, watching people kiss my toes.”