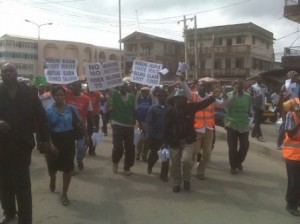 Governor Abdulaziz Yari of Zamfara State and other road users, were, yesterday, trapped in Lagos as hundreds of protesters took to the streets in a peaceful protest to lament the deplorable state of the nation’s public education sector.

The protest kicked off at the Nigeria Labour Congress, NLC, house in Yaba.

Singing solidarity songs, the crowd moved to Ojuelegba, and occupied the busy Ikorodu Road for several minutes, refusing entry to motorists, including the Zamfara governor’s convoy.

When the convoy finally made its way through the crowd, there was loud booing and calling of unprintable names.

The protest terminated at Maryland Roundabout, with anxious commuters trapped in the traffic until the crowd was addressed and dismissed.

The JAF Secretary, Mr. Abiodun Aremu, said: “This is just the kick-off point. Our goal is to shut down the country, until government makes education a priority.” [Vanguard]