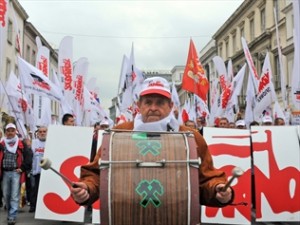 At least 100,000 demonstrators have gathered in Warsaw for the conclusion of four days of anti-government protests against attempts to liberalise Polish labour laws.

“This is the last warning for the government,” said Jan Guz of the general OPZZ labour union.

“If they don’t take this to heart, we’ll block up the whole country.”

Plans by the government to raise the retirement age to 67 and bring in flexible labour policies have been some of the key complaints by the demonstrators, who began gathering on Wednesday.

Demonstrators assembled in Castle Square to collect signatures calling for the legislature to be dissolved.

Organisers said up to 200,000 had attended, which would make it one of the largest demonstrations in Warsaw in recent years.

Police reported no scuffles, but traffic in the city centre was blocked for several hours.
Demonstrators marched through the streets shouting “It’s time for a general strike,” while others lit fireworks and candles.