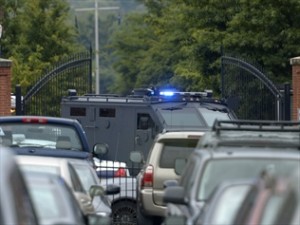 A former US naval reservist killed 12 people in a shooting rampage at a military base in the heart of Washington before himself being killed in a shootout with police.

Police identified the alleged gunman as Aaron Alexis of Fort Worth, Texas, who served in the navy from 2007 to 2011 before becoming a defence subcontractor for computer giant Hewlett-Packard.

“We do now feel comfortable that we have the single and sole person responsible for the loss of life inside of the base today,” police chief Cathy Lanier said late on Monday.

The Federal Bureau of Investigation (FBI) appealed to the public for information on the 34-year-old, whose military service was marked by disciplinary problems and who reportedly had once been arrested but not charged in Texas for shooting a bullet through his apartment ceiling.

“No piece of information is too small. We are looking to learn everything we can about his recent movements, his contacts and his associates,” said Valerie Parlave, assistant director of the FBI’s Washington field office.

The FBI released a photo of Alexis, who held the rank of an Aviation Electrician’s Mate 3rd Class and had served full-time in a logistics support squadron in Fort Worth, according to the navy.

The shooting left Washington on edge and there was a security scare hours later at the White House when a man who apparently threw firecrackers over a fence at the US president’s residence was swiftly arrested.

Even hours after the shooting, Alexis’s motivation for opening fire, reportedly with an AR-15 assault rifle, was unclear. His four-year stint in the navy was troubled, officers said.

“There is definitely a pattern of misconduct during his service,” a US military officer, who spoke on condition of anonymity, told AFP.

Friends in Texas told US media that Alexis had an interest in Buddhism and was conversant in the Thai language and had thought about moving to Asia.

Most recently, Alexis was employed as an IT subcontractor for a company called “The Experts”, which was working on a Hewlett-Packard contract to upgrade equipment for an intranet network used by the US Marine Corps and navy, HP said in a statement.

The suspect’s work as a naval contractor suggested he may have had a pass that could gain him entry to the Naval Sea Systems Command, which oversees ship-building programs carried out by defence firms.

It was unclear if the military or HP had been aware of Alexis’ brushes with the law, including reportedly two shooting incidents, before he was hired for the IT job.

The shooting sparked a massive show of force as police and federal agents descended on the Navy Yard, which is located on the Anacostia River, less than three kilometres from the Capitol.

President Barack Obama ordered that flags be flown at half mast in the US capital until Friday as a mark of respect for the dead.

Obama called the shooting a “cowardly act” and said that America was confronting “yet another mass shooting”, saying troops in the military should not have to face danger at home.

Earlier media reports said the shooter had allegedly barricaded himself in a room in a headquarters building.

After the first reports of shots came at 8.20am (2320 AEST) on Monday in the headquarters building of the Naval Sea Systems Command, police arrived within three minutes and exchanged fire in “multiple engagements” with the suspect, Lanier said.

A Washington police officer was among those injured. Hospital officials said he suffered serious wounds to his legs but was expected to survive.

One employee at the Navy Yard, Patricia Ward, said she had just paid for her breakfast at a cafeteria when shots rang out.

“I was waiting for my friend to pay when we heard the gun shot. It was three gun shots straight in a row, ‘pow-pow-pow’,” she told reporters.

“Three seconds later it was ‘pow-pow-pow’. So it was like a total of seven gun shots. And we just started running.”

As helicopters swarmed overhead, police earlier blocked off intersections around the Navy Yard and patrol boats moved in near the site along the river banks.

Flights out of the nearby Reagan National Airport were briefly delayed and several schools were on lockdown until anxious parents came to pick up their children in the afternoon.

The US Senate adjourned for the day as a precaution, and Washington’s baseball team, the Nationals, whose stadium is adjacent to the Navy Yard, called off its Monday evening game.

US Capitol police said in a statement late on Monday that congressional activities would resume as normal on Tuesday.

About 3000 people work at the naval facility, which dates back to the early 1800s and includes a naval history museum. The complex also has a residence for the four-star chief of the US Navy, Admiral Jonathan Greenert.