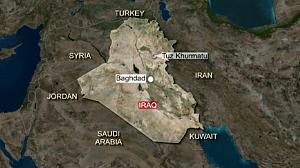 16 people have been killed in attacks in central Iraq, including six shot dead when gunmen stormed a house where a corpse was being ritually washed ahead of a funeral.

Tuesday’s violence, in restive Diyala province and an area known as the “Triangle of Death”, is the latest in a surge in unrest that has left more than 4000 people dead so far this year.

Authorities have sought to tackle the country’s worst unrest since 2008 with wide-ranging operations targeting militants as well as tight traffic measures in the capital, but attacks have continued to rock many cities.

In Tuesday’s deadliest attack, gunmen stormed a house in the town of Yusufiyah and killed six people, including two women, as they were ritually cleansing the body of a Sunni Arab man ahead of his funeral, a police officer and a doctor at a nearby hospital said.

Also among the victims was the dead man’s son.

Yusufiyah and Latifiyah lie within a confessionally-mixed region south of Baghdad known as the ”Triangle of Death” for the brutal violence in the area at the peak of Iraq’s sectarian war.

Latifiyah in particular has seen a spike in bloodletting in recent weeks, including separate early morning attacks by gunmen on two families.

Baquba, as well as the surrounding province, is mostly populated by Sunni Arabs, albeit with substantial Shi’ite Muslim and Kurdish minorities.

The province remains one of Iraq’s least stable.

The spike in bloodletting has sparked concerns Iraq is slipping back towards the all-out sectarian war that engulfed it in 2006 and 2007.

Officials have vowed to press on with a campaign targeting militants they say has led to the capture of hundreds of fighters and the killing of dozens more.

But the government has faced criticism for not doing more to defuse anger in the Sunni Arab community over alleged ill treatment at the hands of the Shi’ite-led authorities.