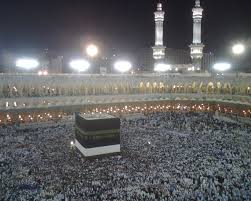 About 190,000 Muslim men and women have arrived in Saudi Arabia through the Jeddah airport to perform Hajj (pilgrimage), an official has said.

“We have had so far 900 flights that brought in the 190,000 would-be pilgrims,” Abdul Hameed Aba Al Ari, the airport director, said, local news site Sabq reported on Tuesday.

The figure marks a 34 per cent decrease compared with last year’s numbers. “We do not expect the number of would-be pilgrims arriving through the airport to exceed one million,” he said.

Massive construction work at the Grand Mosque in Makkah has pushed Saudi Arabia to request a new cap on the number of people who will be allowed into the kingdom for Hajj. A Hajj quota was introduced in 1987 following an agreement by all member countries of the Organisation of Islamic Cooperation (OIC) to limit the number of pilgrims allowed by each country to 0.1 per cent of its population.

Several countries have requested an increase in their quotas, but Riyadh said that construction work in Mecca has put heavy pressure on the possibility of accommodating more than the three million pilgrims who congregate in the sacred city each year.

Saudi Arabia has repeatedly warned against using the congregation of Muslims to promote political, ideological or sectarian agendas. This year, the situation is more tense than usual amid a growing number of confrontations between various segments of societies in several Arab countries, mainly Egypt and Syria, and the Saudi authorities have warned against turning the annual religious gathering in Mecca into arenas for ideological quarrels.

The six-day Hajj, based on the Muslim lunar calendar, is expected in mid-October this year. Pilgrims begin their Hajj journey in the tent city of Mina, on the outskirts of Mecca, ending it four days later, on the third day of Eid. Islam requires all physically fit and financially able Muslims to perform Haj at least once in their lifetime.