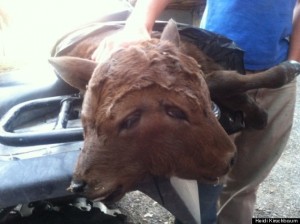 No, you’re not seeing double. This is an actual two-headed calf.

On Monday, the body of a recently born calf was found dead in the pasture of the Kirschbaum family farm just outside Jamieson, Ore.

“In all my family’s time on the farm and from all the stories i’ve heard, we’ve never had anything like this before.” Heidi Kirschbaum, 31, who lives on the farm along with her four kids, parents, and siblings, told The Huffington Post.

“I just can’t believe it happened on our farm, we don’t have a lot of cows anymore,” Kirschbaum said, adding that the family currently has 15-20 cows on the farm.

Kirschbaum’s sister-in-law was the first to discover the rare cow on the farm’s grassy pasture. The two women then decided to preserve the animal’s body and hauled it back to their freezer via a four-wheeler to wait and decide what to do with its body.

A local veterinarian interviewed by KTVB said this finding is definitely rare, and most likely a genetic mutation.

“They do happen, and usually it’s a twin that kind of formed together,” veterinarian Katrina Abbott, of the nearby Vale Veterinary Clinic, told KTVB.

The calf’s mother is reportedly doing fine after the fatal birth.

This isn’t the first sighting of a two-headed animal in the U.S. In 2011, a cow in Georgia also gave birth to a two-headed calf, and earlier this year, a two-headed turtle named Thelma and Louise was born at the San Antonio Zoo.