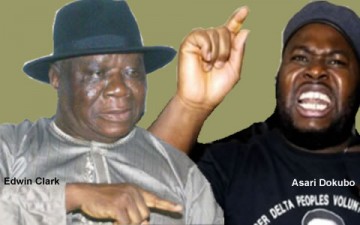 As concerned stakeholders of the ruling People’s Democratic Party, PDP, intensify efforts to salvage the party from falling apart completely, a founding father of the party, Chief Abu King Shuluwa, has urged President Goodluck Jonathan to caution the duo of Chief Edwin Clark and Mujahid Asari Dokubo from making inciting and inflammatory statements.

The call was re-echoed by former Lagos State Commissioner of Police, Alhaji Abubakar Tsav in a statement he issued in Makurdi on Sunday.

Tsav said: “Our soldiers fought to keep Nigeria as one, during which many lost their lives, where was Asari Dokubo? He cannot and should never destroy a house which he did not partake in building.

“Asari Dokubo has no monopoly of violence, unfortunately Nigeria is a country where the enforcement of law is discriminatory in favour of government and party thugs; that is why anyone on the payroll of government can threaten to unleash bloodbath in the country and security agencies are doing nothing about such threats.”

“I urge President Goodluck Jonathan and Chief Edwin Clark for whom Asari Dokubo is working to tame him and call him to order; while I call on former Presidents Ibrahim Babangida, Olusegun Obasanjo and other eminent Nigerians not to withdraw from the ongoing peace talks.”

Chief Shuluwa in a similar statement wondered why Asari Dokubo, an ex- militant, who is supposed to remain in the creeks should be opening his mouth wide to insult the intelligence of Nigerians and declaring former vice president Alhaji Atiku Abubakar a persona-non-grata in a country that belonged to all Nigerians.

“Unfortunately, even Clark has turned the issue of Presidency to an Ijaw fight. Where were they in 2011 when Nigerians trooped out in their numbers to vote in a Nigerian President, not an Ijaw President?”

“These people’s utterances are becoming unwarranted. Is this the first time the minority in Nigeria is producing the President of the country,” he asked.