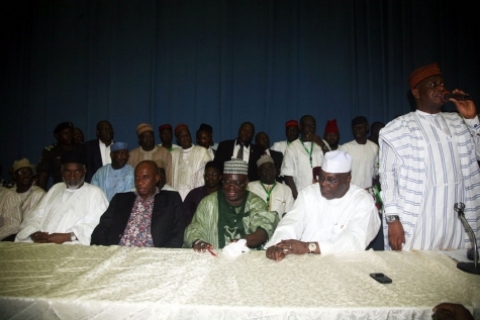 The Alhaji Abubakar Kawu Baraje-led faction of the Peoples Democratic Party (PDP) has received the backing of twenty-six serving Senators of the Federal Republic of Nigeria, who also hailed former Vice President Atiku Abubakar, six northern governors and Governor Chibuike Amaechi of Rivers state for storming out of the venue of Saturday’s Special National convention of the PDP.

In a statement yesterday, the senators said that , “By this decision that no doubt provides a soothing balm that will calm frail nerves in the party,  you have written your names in gold and will be remembered in our political history as men that stood to save the party and Nigeria’s democracy.

“We congratulate the new chairman, Alhaji  Abdulahi  Kawu Baraje,  the Deputy Chairman, Dr Sam Sam Jaja, National secretary, Prince Olagunsoye Oyinola and other members of the National Executive Committee for their emergence as leaders of our great  party.

“We therefore, pledge our unfettered loyalty to the Barage-led PDP National Executive.”

It was also learnt that Senators Dahiru Kuta, Niger East and Zainab Kure, Niger South, have thrown their weights behind the Baraje-led PDP in solidarity of their governor, Aliyu Babangida.