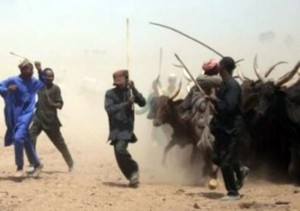 At least 33 persons were feared dead in a fresh outbreak of fighting between suspected Fulani herdsmen and native farmers in Agatu Local Government Area of Benue State.

According to eyewitnesses, the crisis which erupted Saturday and lasted till yesterday, led to the death of some who burnt beyond recognition. Over 30 houses and huts were also razed, including several farmlands and fish ponds owned by the natives.

“The Fulani herdsmen had invaded Ojantele, Okpagabi and Ibadan in Agatu council on Saturday, killing close to 10 people,” the source supplied.

“From there, they ambushed about three people from Agatu, who were going to a neighbouring villages in Apa Local Government Area of the state and slaughtered them in cold blood.”

“The unwarranted killing and destruction of houses, huts and farms prompted a reprisal attack on Sunday at the Fulani settlement in a boarder village between Apa and Agatu, where a free for all ensued leading to the death of many more people.

“The development has led to villagers living at the border of both Apa and Agatu councils fleeing their abode and taking refuge in neighouring towns and villages for fear of being killed by the mercenaries, who have taken over the fighting.”