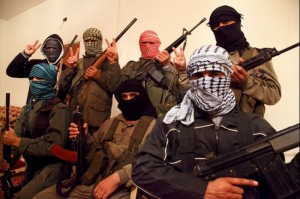 Fighters linked to al-Qaeda have overrun a Syrian town near the border with Turkey after fighting broke out with units of the anti-government Free Syrian Army, opposition activists say.

Fighters from the Islamic State of Iraq and the Levant on Wednesday stormed the town of Azaz, 5km from the Syrian-Turkish border, and killed at least five FSA members, the activists said, adding 100 people were taken captive.

Reports in the late evening said that fighting was continuing and getting closer to a border crossing at Bab Al Salama, which is controlled by the FSA.

The fighting is the most severe since tensions mounted earlier this year between the rebel factions fighting to overthrow Syrian President Bashar al-Assad.

The fighting could pose a dilemma for the Turkish government, which has been allowing fighters to cross into Syria from its territory, but may not be keen to see al-Qaeda so close to its border.

Abu Ahmad, an activist inside Azaz, told the AFP news agency: “The Islamic State of Iraq and the Levant has seized complete control of Azaz. They are in control of the town’s entrances.”

Abu Louay al-Halabi, an activist, said the fighting broke out after the Storm of the North Brigade, an FSA unit, resisted attempts by the Islamic State of Iraq and Levant to abduct a German doctor working as a volunteer at a private hospital Azaz.

“By taking Azaz, the Islamic State is a step closer to controlling the crossing. Its objective seems to be taking over the whole countryside north of Aleppo,” he said.

The Syria-Turkey border areas have been rocked by fighting and bomb attacks in recent days.

A bomb attack struck the Bab al-Hawa crossing on Tuesday, and Turkish fighter jets shot down a Syrian regime helicopter when it strayed into Turkish airspace on Monday.

Elsewhere in Syria on Wednesday, clashes continued in the town of Areeha, which lies between the government-controlled coastal city of Latakia and the northern cities of Idlib and Aleppo.

According to the FSA, rebel soldiers gained ground in the area, after several raids on regime stations in the town. [AlJazeera]